There’s a kind of unreality about the way financial markets are behaving these days.

For a start, in a growing number of countries, central banks’ benchmark interest rates are below zero, which is a hard concept to get your head around.

What it means, simply, is that the old bogey of inflation has disappeared so completely that some of the world’s most powerful monetary authorities are willing to pay for deposits in the hope that it helps stimulate economic activity and produces some inflation.

So far, it hasn’t worked. But that looks unlikely to stop New Zealand getting to negative interest rates too by some time next year.

If a standard bank savings account is paying between 0.5 percent and 1.3 percent, savers are already receiving a negative return on their deposits, after adjusting for inflation. And that’s with the Reserve Bank’s Official Cash Rate at 0.5 percent.

If it goes lower, so will returns to savers in what remains one of the safest havens for your money – a registered trading bank savings account.

Meanwhile, in the equities markets, shares continue to trade at extraordinarily high levels compared to their capacity to pay dividends. This is the result of now more than 10 years of economic recovery since the 2008 global financial crisis, which has been spurred by this long experiment with ‘unconventional’ monetary policy.

For as long as interest rates stay as low as they do, it’s reasonable to assume that investors will continue to pump up the value of other assets: shares and property being the most obvious examples.

But with the world economy slowing – and New Zealand’s with it – the prospects for an ongoing upward march in the value of shares and real estate must be open to question.

That is particularly so because the coming global slowdown is not the product of the usual ebb and flow of a business cycle – a concept that seems almost to have been forgotten in the last decade.

Rather, it reflects global political forces that are breaking down the rules of trade and diplomatic engagement that underpinned the Western-led international order since the end of the Second World War.

Everyone knows what these pressures are: a US-China trade war with no apparent endgame; Britain’s self-inflicted Brexit wound and the uncertainty and confusion that is creating for already sluggish Europe.

Public support for globalisation, which has raised prosperity for billions in the developing world – especially China – and created a world of cross-border economic inter-dependence -is on the wane in developed countries, where its unequal societal impacts have begun to outweigh benefits that are largely taken for granted.

And in many countries, authoritarian leadership is on the rise, challenging the once unchallenged assumption that the world would slowly but surely democratise.

Some future-casters see a historical inflection point, where the underlying impulse is the fundamental shift of power away from the US and the west to China and Asia. In other words, things are unlikely to be the same as they were 10, let alone five, years ago.

As a cork in this ocean of uncertainty, New Zealand continues to perform relatively well. The government’s accounts are in good shape, meaning a downturn could be met with increased spending and investment in the country’s infrastructure deficit.

And one of the most powerful ‘automatic stabilisers’ – a floating exchange rate – is cushioning the impact of lower commodity prices, even as it pushes up the cost of all imported goods.

Who knows? With the Kiwi dollar trading below its 30 year average in recent weeks (see chart), we might even see a little inflation ignite, which could in turn stave off the need for the Reserve Bank’s benchmark interest rate to fall below zero.

Responding, as an investor, to tectonic shifts in global politics doesn’t come with easy answers.

In the meantime, I’m letting patience, realistic expectations about returns in a low inflation environment, and an eye to the things that people will never stop needing be my basic guide. 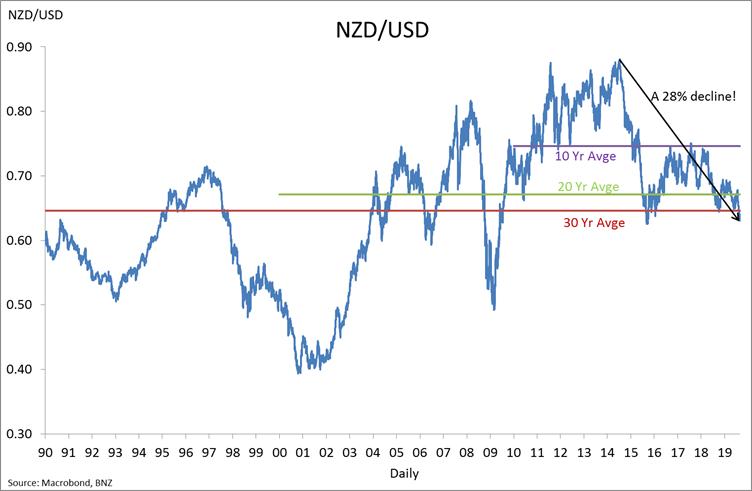 TALK TO AN EXPERT