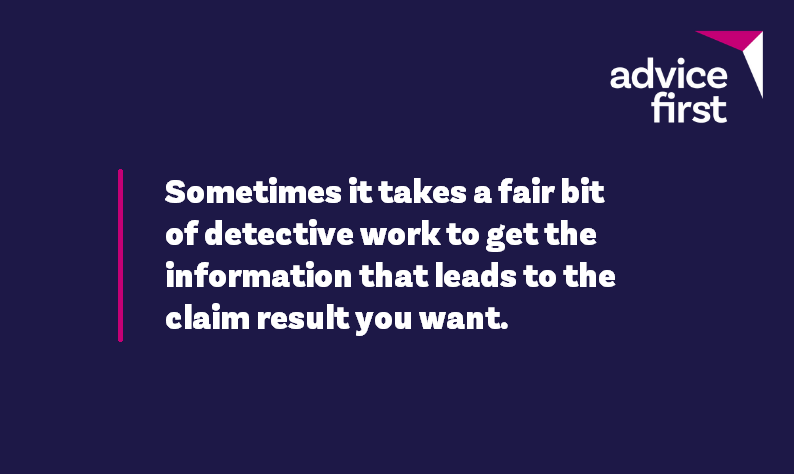 Sometimes it takes a fair bit of detective work to get the information that leads to the claim result you want.

One of our group insurance business clients had an employee who had worked for them for over twenty years. In November 2017, her role was disestablished. Jane (name has been changed) who was 51 years-old, didn’t have a new job to go to and because it was almost Christmas, she decided to enjoy some time out and think about her employment options in the new year.

Jane also had an income protection policy which gave her a maximum of sixty days to take up the continuation option. If she did so, her qualifying pre-existing conditions would be covered. But as she wasn’t working, she decided not to take the option up. After a relaxing Christmas with her family, the new year rolled in and it was time to look for a new job.

At this point, something unexpected happened. Some medical tests revealed that she had early stage dementia and sadly it was already fairly advanced. Jane’s husband, Peter, contacted their AdviceFirst Financial Adviser James Polson for help. The two discussed the situation in great detail.

Although the dementia hadn’t been detected until now, Peter believed his wife’s condition had begun some time ago, back when she was still employed. This presented an interesting challenge. James Polson began investigating whether there was any chance of making a back-dated claim. The insurance company indicated it was worth giving it a go.

Peter and James together gathered all the medical notes, letters from specialists and a timeline of events. They had done all they could. Now they just needed to wait. The process took a while, but Jim and James were heartened that the insurance company seemed to be looking for enough information to support a payment of the claim.

Their work and research paid off. After some weeks the insurance company said there was enough supporting evidence to show that the condition started while Jane was working. The claim was accepted and 75% of Jane’s income from her old employer will be paid for the benefit period of the policy.

This will make an immense difference to the family including their teenage daughter, by giving them resources to help adapt to their new life and plan for the future.

Peter says he and Jane are incredibly grateful to AdviceFirst and the insurer for their assistance. This story is proof that sometimes a claim isn’t cut and dried. However, with the help of your AdviceFirst Adviser and their expertise, you can achieve a better outcome than you ever imagined.

READ MORE ON THE PRICE OF INSURANCE